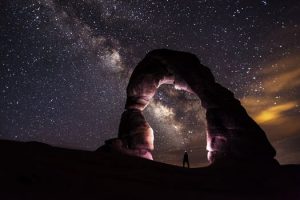 I recently attended a fascinating lecture at Oxford on the existence of a variety of micro-organisms in what would seem an improbable environment: the Atacama Desert in northern Chile, which is the driest place on earth. Professor Rafael Vicuña, a distinguished biologist at the Catholic University of Chile, presented results of his research, which show how life has found ingenious ways to adapt to extreme conditions such as very low water availability, high salt concentration, and intense ultraviolet radiation.

This research is especially intriguing because the Atacama is seen as a terrestrial analogue for Mars. In fact, NASA is interested in the ways in which research in this desert might contribute to its astrobiology program. For some time, astrobiologists have been studying what are called extremophiles, organisms that live in extreme conditions. Do we get closer to understanding the origin of life the more we advance in our knowledge of life at its frontiers?

It is precisely such a question that is properly in the domain of the philosophy of nature. It would be of considerable benefit for biologists and other natural scientists to become acquainted with the insights this discipline offers. The philosophy of nature is a more general science of nature than any of the diverse empirical sciences. It depends upon the various natural sciences to understand nature, but the philosophy of nature concerns topics that are not specific to any one of the sciences, but common to them all: the nature of change and time, how physical entities are unities (as distinct from mere heaps of elements), and what the differences are between the living and the non-living.

What can the philosophy of nature tell us about investigating the origin of life? First of all, it can help us to avoid the errors in various philosophical claims about life and its origins. Questions concerning the nature of living things precisely as living have currency, in part, because of the persistence in modern culture of various materialist, mechanist, and reductionist accounts of living and non-living entities that eliminate any real, qualitative distinction between the living and the non-living.

There are many who, by accepting a form of materialism and reductionism—that is, by insisting that living things are nothing more than the sum of their physical components—conclude that a question such as “What is life?” is, at the very least, not a biological question, and probably is best rejected as a question without content. So we hear that one ought to resist using the term “life” to describe what is just a highly sophisticated movement of matter. In an important sense, according to such a view, “life,” as something other than matter in motion, does not exist. Life, however, is more resilient than attempts to eliminate it as a category of scientific discourse, not to mention as a feature of nature!

In The Atheist’s Guide to Reality: Enjoying Life without Illusions, Alex Rosenberg, professor of philosophy at Duke University, tells us that the combination of contemporary physics and evolutionary biology offers an exhaustive account of everything that exists. He enthusiastically embraces “scientism” and its nihilistic consequences. Rosenberg claims:

If we accept evolution as the mechanism that gave rise to us, we understand that we are nothing more than a highly ordered collection of bio-molecules. Molecular biology has made fantastic strides over the last fifty years, and its goal is to explain all the peculiarities and details of life in terms of molecular interactions. A central tenet of molecular biology is that that is all there is.

For those scientists and philosophers who embrace some form of materialism, there is a strict disjunction: either we explain the living in terms of material, mechanically operating constituents, or in terms of some mysterious spiritual substance, some vital force. There is no substitute for materialism but magic, for there is no philosophical position other than materialism that is compatible with the science of biology. This is true, so the argument goes, because this mysterious substance, this vital force, yields itself even in theory to no method of investigation. Thus, it must be cast aside, leaving one with the inevitable conclusion that there is nothing more to living beings than their material parts.

The philosophical analysis that concludes that we must choose between materialism and vitalism, however, is based on a limited understanding of the options. Biologists and other natural scientists ought to avoid a philosophical interpretation of nature that reduces reality to the purely material and empirically observable.

In this essay, I will leave aside the contributions of the philosophy of nature to what life is, although they disclose compelling alternatives to materialism and vitalism. Rather, I want to focus on change. Surely, change from the non-living to the living—a transition that would have to occur at the origin of life itself—must be instantaneous. At first, this might seem a strange claim. For the changes we observe, for example, a change in place or an increase in some quantity or the growth of an organism, are stretched out in time. They are, at least in principle, observable, even though in some instances we need highly sophisticated instruments to do the observing.

But any change from the non-living to the living cannot be stretched out in time. How do we know this—and know it prior to any particular change? Whatever entity we might wish to consider: it is either alive or not. We might not know whether it is alive or not, but we know for sure that it is one or the other. An entity cannot be a little bit alive or a little bit not alive. Thus, the change from non-living to living cannot be an observable transition, since the change occurs all at once, instantaneously. Although we only observe empirically those changes that occur in time, we can know that an instantaneous change has occurred. We can recognize new life. Similarly, the change that is death is instantaneous; one is not partially dead any more than one is partially alive.

The term “instantaneous change” may seem to be an oxymoron—but only to those who have not understood the philosophy of nature, as that philosophy explains change. Our world is full of such changes. Living beings produce other living beings. When a new rabbit comes into existence, for example, all sorts of changes occur in the movement of sperm and ovum, but the change from non-rabbit (neither the sperm nor the ovum is a rabbit) to rabbit is instantaneous. This change is, in principle unobservable, although the result of the change is indeed observable. As our knowledge of mammalian embryology advances, we understand more and more the processes that lead to reproduction, but we ought not to identify these processes with the change that is reproduction.

There might be any number of intermediate biological entities between a non-rabbit and a rabbit, but when we look at any of these entities, they are whatever they are (and not something else); and they are not “partial rabbits.” A series of processes may very well be occurring that will result in a new member of the species rabbit; but if we speak of only the sum of these processes as “reproduction,” we are not speaking with adequate precision, either biological or philosophical. Reproduction is not the sum of those changes prior to it; rather, it is a distinct change in its own right, even if prepared for by various other changes. The various physical and chemical changes that prepare the way for reproduction are different in kind from the change that is reproduction.

Obviously, reproduction must be distinguished from whatever change we identify as the ultimate origin of life. In a sense, of course, this radical origin of life is beyond the grasp of biology, since biology seeks to understand changes among already existing living beings. Any explanation of the origin of life requires a science wider in its scope than biology—and wider, as well, than physics and chemistry.

There was an especially good example of the confusion about change and the identity of living things in an essay by Larissa MacFarquhar in a September 2011 essay in The New Yorker. She was writing about the work of philosopher Derek Parfit, probably most famous for his work Reasons and Persons, and she relates the following thought experiment and draws conclusions from it.

Suppose that a scientist were to begin replacing your cells, one by one, with those of Greta Garbo, at the age of thirty. At the beginning of the experiment, the recipient of the cells would clearly be you, and at the end it would clearly be Garbo, but what about in the middle? It seems implausible to suggest that you could draw a line between the two — that any single cell could make all the difference between you and not-you. There is, then, no answer to the question of whether or not the person is you, and yet there is no mystery involved — we know what happened. A self, it seems, is not all or nothing but the sort of thing that there can be more or less of. When, in the process of a zygote’s self-multiplication, does a person start to exist? Or when does a person, descending into dementia or coma, cease to be? There is no simple answer — it is a matter of degrees.

Here we have an example of an analysis that fails to grasp the unity of a human being and the fact that there are no such things as beings that are partially human or partially non-human. The specific change that brings about a human being—the complete fertilization of a human egg with human sperm—is instantaneous. Being a human being is not a matter of degrees. The potentials that human beings have are variously realized through different processes, but these potentials exist in actual human beings. The philosophy of nature shows us how to avoid contemporary confusion in discourse about so-called potential human beings.

The philosophy of nature can help biologists recognize that living beings possess a unity, and hence an identity, that is properly their own. However complex their structure and varied their material makeup, they are not simply the arrangement of diverse, contiguous parts. For every living being, there must be a principle or source of its unity, a principle from which its characteristic behavior flows. Without such a principle of unity, it would be no more than a heap of material elements existing next to one another. Biologists identify living things by their behavior and structure. If we wish to distinguish the living from the non-living, we begin by such observations, but reason leads us on to ask about the source of this distinctive behavior, a source that, in some sense, is a common feature of life. The philosophy of nature offers the biologists ways to understand this source, this principle of life.

The philosophy of nature aids biologists in recognizing the kinds of change that exist in the world as well as the need for some kind of unifying principle that is a source of an organism’s identity. The philosophy of nature helps to identify the limits of biological investigation when it comes to understanding the origin of life from no life whatsoever.

When biologists look at micro-organisms in the Atacama Desert, or living things anywhere, they can know that explanations that only speak of material components offer, at best, an incomplete understanding of life. Biology continues to offer us new and exciting insights into the world of the living. These insights need to be enhanced, as it were, or, perhaps better, integrated into a wider philosophical perspective. In this endeavor, biology needs the philosophy of nature.