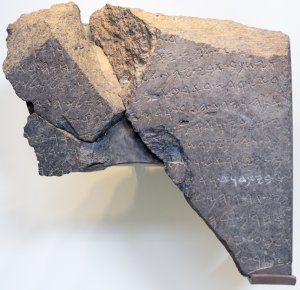 “Ask the generation past, Study what their fathers have searched out.” Job 8:8 (The Israel Bible™)

King David rejoices as the Ark is returned to the Temple. David was among the 53 Biblical figures proven to have existed in the new study. (Wikimedia Commons)

A recently published academic study which proves the historical existence of at least 53 Biblical figures may represent a recent trend in the academic and archaeological world giving unprecedented credibility to the truth of the Bible.

Lawrence Mykytiuk, a Purdue University Libraries professor, recently confirmed in a study that 53 figures “mentioned in the Bible have been identified in the archaeological record”. Using archaeological sources and references from outside of the Bible, Mykytiuk established that the existence of at least 53 people described in the Bible is confirmed by the historical record (see below for the full list).

Mykytiuk’s study is a watershed moment in the debate surrounding whether or not the Bible is historically accurate and therefore relevant to academia and historic studies outside the realm of religion and theology.

“While some would put their hand on the Bible and really mean it when they take an oath, a few revisionist academics would throw it out and say, ‘That’s creative writing.’ I was looking for concrete, objective evidence outside of the Bible that would help build the case,” Mykytiuk, an associate professor of library science, explained in a press release.

Mykytiuk’s work confirms that the Bible is indeed supported by concrete proof.

“This evidence shows that it is not essential to have religious faith in order to understand and accept much of what the Bible presents,” he said. “It demonstrates that even on the basis of writings outside of the Bible alone, Scripture does have a considerable degree of historical credibility.”

Verifying Biblical characters is a passion for Mykytiuk, who began investigating the subject in 1992 as a graduate student in Hebrew and Semitic studies at the University of Wisconsin-Madison. In the course of his studies, he saw an image of a clay impression from a signet ring belonging to a servant of King Hezekiah, mentioned in the Book of Kings and one of the first figures on Mykytiuk’s list. The professor was disturbed at scholars who questioned the veracity of the Bible.

“[They] were saying the Hebrew Bible was a work of fiction with a few historical references thrown in,” he said in a Times of Israel interview. “I said, ‘Wait a minute. I just saw a seal impression of a servant of Hezekiah.’”

In the third year of King Hoshea son of Eila of Yisrael, Chizkiyahu son of King Achaz of Yehuda became king. II Kings 18:1

Incontrovertible proof of Hezekiah’s reign in the 8th century BCE was provided when a seal bearing his name was discovered in Jerusalem in December 2015. Dr. Eilat Mazar, the Israeli archaeologist who discovered the seal of Hezekiah in the Ophel excavations and held it in her hands, supported Mykytiuk’s conclusions.

“It is clear that there are many artifacts that prove beyond any doubt that so many aspects of the Bible are historically accurate. There shouldn’t even be a discussion about what we have already found,” Dr. Mazar told Breaking Israel News. “Anyone who dismisses the entire Bible, or its veracity as a source, is ignoring concrete proof that already exists.”

Dr. Mazar is not a religious Jew, but her work as an archaeologist has led her to conclude that the Bible is far more than a collection of fanciful parables. Her oft-quoted motto is, “I work with the Bible in one hand and the tools of excavation in the other, and I try to consider everything.”

“There is a significant amount of archaeological proof that corroborates the Biblical narrative. From a statistical perspective, it gives a high level of credibility to the Bible,” Dr. Mazar said. “This is undeniable. In archaeology, you have to first bring the proof, the facts. If the facts are sufficient, you can come to a conclusion.”

The first challenge for Mykytiuk was of utmost importance: King David. Mykytiuk cross-referenced the Biblical references with a wall inscription found at the Tel Dan excavations in northern Israel.

“‘King of Israel’ was in one line,” Mykytiuk told Times of Israel. “The next line read ‘Melech Beit David.’ It was in Aramaic, by the enemies, the Arameans, who conquered Tel Dan and indicated a victory monument, a stele, a big sign in stone. The Israelites reconquered it, and smashed [the stele] to pieces that they used to make a wall.”

Mykytiuk limits his conclusions to what is verifiable. Even when a character is proven to exist historically, it is not a blanket seal of approval for all that is written about that character in the Bible.

“When you verify that a person existed, you’re not usually verifying that they did what the Bible says they did, because you don’t usually get that much information in the inscription or in the Bible,” Mykytiuk said. “If you get the person’s name, his or her father’s name, and the person’s office or title, that doesn’t verify that they did certain things. But it can sometimes show they were in a position to do the things Scripture says they did. That’s often as far as you can go.”

One such case was a new addition to the list: Tattenai, a Persian administrator under Darius the Great, mentioned in the Book of Ezra.

At once Tattenai, governor of the province of Beyond the River, Shethar-bozenai, and their colleagues descended upon them and said this to them, “Who issued orders to you to rebuild this house and complete its furnishing?” Ezra 5:3

Tattenai is also mentioned in a tablet attributed to Darius from 502 BCE.

Mykytiuk uses a three-step process to verify the Biblical characters. He requires that there be at least three different references identifying the individual in the Bible, such as the person’s name, the father’s name, and the person’s title. These Biblical identifiers must must match the same three identifying marks of the individual in inscriptions discovered by archaeologists.

Three identifying matches are considered a lock, two are considered a reasonable hypothesis, or even a likely hypothesis for a match, but one match is not enough for a character to make it onto Mykytiuk’s list. He is careful to refer to artifacts with a clear provenance. Artifacts acquired through the antiquities black market are not referenced.

His previous study, published in 2014, established 50 characters, beginning with King David, all of whom he says he has verified through this method. The Bible names almost 3,000 people, but the majority of these people are described only by name and little additional information is given about them, making historical verification impossible. In his study, Mykytiuk estimated that the number of individuals for whom the Bible gives enough information to identify them specifically is no more than a few hundred.