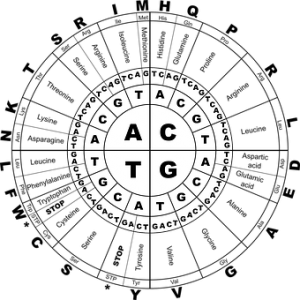 “I hope there are no creationists in the audience, but it would be a miracle if a strand of RNA ever appeared on the primitive Earth.”1

Hugh Ross and I witnessed the late origin-of-life researcher, Leslie Orgel, make this shocking proclamation at the end of a lecture he presented at the 13th International Conference on the Origin of Life (ISSOL 2002).

Despite these problems, many origin-of-life researchers—including Leslie Orgel (while he was alive)—remain convinced that the RNA world scenario must be the explanation for the emergence of life via chemical evolution. Why? For one key reason: the intermediary role RNA plays in protein synthesis.

The RNA world hypothesis posits that biochemistry was initially organized exclusively around RNA and only later did evolutionary processes transform the RNA world into the familiar DNA-protein world of contemporary organisms. If this model is correct, then the DNA-protein world represents the historically contingent outworking of evolutionary history. To put it another way, contemporary biochemistry has been cobbled together by unguided evolutionary forces and the role RNA plays in protein synthesis is an accidental outcome.

The discovery of ribozymes in the 1980s provided initial support for the RNA world scenario. These RNA molecules possess functional capabilities, behaving just like enzymes. In other words, RNA not only harbors information like DNA, it also carries out cellular functions like proteins. Origin-of-life researchers take RNA’s dual capacities as evidence that life could have been organized around RNA biochemistry. These same researchers presume that evolutionary processes later apportioned RNA’s twofold capabilities between DNA (information storage) and proteins (function). Origin-of-life researchers often point to RNA’s intermediary role in protein synthesis as evidence for the RNA world hypothesis. Again, RNA’s reduced role in contemporary biochemical systems stands as a vestige of evolutionary history, with RNA viewed as a sort of molecular fossil.

Ribosomes serve as a prime illustration of RNA’s role as a go-between in protein synthesis. As subcellular particles, ribosomes catalyze (assist) the chemical reactions that form the bonds between the amino acid subunits of the proteins. Two subunits of different sizes (comprised of proteins and RNA molecules) combine to form a functional ribosome. In organisms like bacteria, the large subunit (LSU) contains 2 ribosomal RNA (rRNA) molecules and about 30 different protein molecules. The small subunit (SSU) consists of a single rRNA molecule and about 20 proteins. In more complex organisms, the LSU is formed by 3 rRNA molecules that combine with around 50 distinct proteins, and the SSU consists of a single rRNA molecule and over 30 different proteins.

The rRNA molecules function as scaffolding, organizing the myriad ribosomal proteins. They also catalyze the chain-forming reactions between amino acids. In other words, the ribosome is a ribozyme. At the ISSOL 2002 meeting, I heard Orgel adamantly insist that the RNA world hypothesis must be valid because rRNA catalyzes protein bond formation.

Orgel’s perspective gains support considering the inefficiency of ribozymes as catalysts. Protein enzymes are much more efficient than ribozymes. In other words, it seemingly would be better and more efficient to design ribosomes so that proteins catalyzed bond formation between amino acids, not rRNA. This reason convinces origin-of-life researchers that the role rRNAs play in protein synthesis is a haphazard consequence of life’s historically contingent evolutionary history.

But recent work by scientists from Harvard and Uppsala Universities paints a different picture of the compositional makeup of ribosomes, and in doing so, undermines what many origin-of-life researchers believe to be the most compelling evidence for the RNA world hypothesis. These researchers demonstrate that the compositional makeup of ribosomes does not appear to be the accidental outworking of an unguided, contingent process. Instead, an exquisite molecular logic accounts for the composition and structural properties of the protein and rRNA components of ribosomes.2

Is There a Rationale for Ribosome Structure?

As part of their research efforts, the Harvard and Uppsala University investigators were specifically trying to answer several questions related to the composition of ribosomes, including:

Before a cell can replicate, ribosomes must manufacture the proteins needed to form more ribosomes—in fact, ribosomes need to manufacture enough proteins to form a full complement of these subcellular complexes. This ensures that both daughter cells have the sufficient number of protein-manufacturing machines to thrive once the cell division process is completed. Because of this constraint, cell replication cannot proceed until a duplicate population of ribosomes is produced.

Ribosome Composition is Optimal for Efficient Production of Ribosomes

As discussed in an earlier blog post, the Harvard and Uppsala University investigators discovered that if ribosomal proteins were large, or if these biomolecules were variable in size, ribosome production would be slow and inefficient. Building ribosomes with smaller, uniform-size proteins represents the faster way to duplicate the ribosome population, permitting the cell replication to proceed in a timely manner. They also determined that the optimal number of ribosomal proteins is between 50 to 80—the number of ribosomal proteins found in nature. In short, the composition of these sub cellular complexes appears to be undergirded by an elegant molecular rationale.

As part of their mathematical modeling study, these researchers also provided an explanation for why ribosomes are made up of large RNA molecules. Because the number of steps involved in rRNA production is fewer than the steps required for protein manufacture, rRNA molecules can be made more rapidly than proteins. This being the case, ribosome production is more efficient when these organelles are built using fewer and larger rRNA molecules as opposed to smaller, more numerous ones.

The research team learned that ribosomes containing more rRNA can be built faster than ribosomes made up of more proteins. This fact helps explain why rRNA operates as the catalytic portion of ribosomes (linking amino acids together to construct proteins), though less efficient as a catalyst than proteins.

An exquisite molecular rationale undergirds the number and size of rRNA molecules in ribosomes and accounts for why the ribosome is a ribozyme. The work of the Harvard and Uppsala University scientists undermines the view that ribosomes were cobbled together as a result of the evolutionary transition from the RNA world to the DNA/protein world. If the presence and role of RNA molecules in ribosomes were simply vestiges of life’s origin out of an RNA world, then there should not be an elegant molecular logic that accounts for ribosome compositions in bacteria and eukaryotic organisms. In other words, it doesn’t appear as if ribosomes are the unintended outcome of an unguided evolutionary process.

This conclusion gains support from earlier work by life scientist Ian S. Dunn. As I wrote about in a previous blog post, Dunn has uncovered a molecular rationale for the intermediary role messenger RNA (mRNA) plays in protein synthesis. Again, it indicates that the intermediary role of RNA molecules in protein synthesis is a necessary design of a DNA/protein world, not a molecular vestige of life’s evolutionary origin that proceeds through an RNA world.

Given these new insights and the intractable problems with the RNA world scenario, I must agree with Leslie Orgel. It would be a miracle if a strand of RNA appeared on the primitive Earth—unless a Creator intervened.

wpDiscuz
8
0
Would love your thoughts, please comment.x
()
x
| Reply
You are going to send email to
Move Comment